For any Ultrabook, it is necessary to provide a thin, good to carry design and a good battery backup for longer duration of work. For these features, manufacturers often compromise on keyboard comfort, battery life or other key features. While its three predecessors had a few of these drawbacks, the 4th-Generation ThinkPad X1 Carbon offers a no-compromise mix of portability and usability.

ThinkPad weighs just 2.6 pounds and it is much easier to carry around the office or lift one-handed than heavier brethren like the ThinkPad T460s (3 pounds) or T460 (3.8 pounds). Despite having smaller, 13-inch screens, the Dell XPS 13 (non-touch) and the MacBook Air weigh 0.1 and 0.36 pounds more. 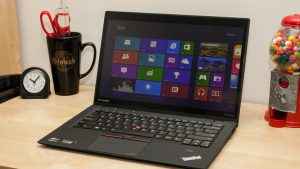 With a carbon-fiber-reinforced plastic lid and a super magnesium body, the ThinkPad X1 Carbon is built to withstand the rigors of frequent business travel, even in challenging environments.

The left-side of the ThinkPad X1 Carbon houses a USB 3.0 port, a mini Display-Port, the proprietary power connector and Lenovo’s OneLink + docking port. The right side contains a 3.5 mm headphone jack, full-size HDMI and two more USB 3.0 ports for a total of 3. The micro-SD card reader is inconspicuously tucked below the lid on the back side.

The ThinkPad X1 Carbon has almost every port you’ll need, with the unfortunate exception of an Ethernet connection and a full-size SD card reader photographers need. It also has a 720p webcam that can capture decent-quality images with colors that were just a little duller than real-life and a bit of visual noise.

With its 4th generation model, Lenovo has finally perfected the X1 Carbon’s keyboard. Where previous generations of the laptop had keys that felt mushy, shallow or just plain awkward. The new keyboard provides snappy feedback that will please the most discerning touch typists. 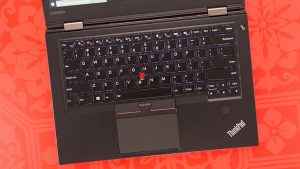 With 1.8 mm of vertical travel, the keys are much deeper than competitors like the XPS 13 (1.2 mm) and MacBook Air 13-inch (1 mm), which makes for a superior typing experience and less bottoming out (hitting the base at full force). Other ThinkPads such as the T460 (2.3 mm) and T460s (1.9 mm) have even more space, but the X1’s strong tactile feel does a lot to make up the difference.

Located between its G and H keys, the X1 Carbon’s bright red TrackPoint pointing stick provides the most accurate and efficient way to navigate around the desktop, highlight text and click icons efficiently. 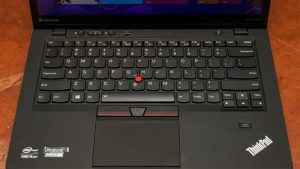 The X1 Carbon has a  large, 3.9 * 2.2-inch button-less glass touch-pad that offers  smooth, effortless pointer control with just the right amount of friction on its smooth surface. Multi-touch gestures, including pinch-to-zoom and four finger finger swipe are quite accurate. 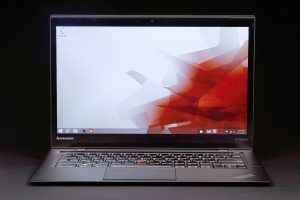 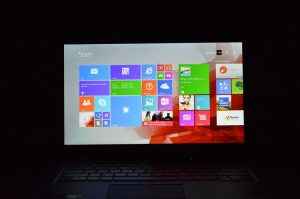 Also, the 1920 * 1080 screen is noticeably brighter, registering 292 nits (higher is better) brightness compared to 257 nits for the 2560 * 1440 panel. However, both displays are above the category average of 248 nits and both had the same solid viewing angles in our tests, with colors fading only slightly at angles wider than 45 degrees to the left or right. The MacBook Air 13-inch (334) and Dell XPS 13 (318), however, were both comfortably above the 300-nit mark.

The X1 Carbon’s integrated Intel HD 520 graphics processor is good enough for video viewing and light media editing, but don’t think about gaming on it. As per Laptop Mag, the laptop scored a sold 67,488 on 3DMark Ice Storm Unlimited, a benchmark that measures graphics prowess. That’s about 20 percent better than the category average (56,162) and over 30 percent ahead of the Dell XPS 13.

The ThinkPad X1 Carbon’s bottom-mounted speakers provided accurate audio output that was loud enough to fill a medium-sized living room and rich enough to dance to. Like other Lenovo laptops, the X1 Carbon comes pre-loaded with Dolby Audio software, which has a manual graphical equalizer, along with presets for Music, Games, Movies and Voice chats.

The ThinkPad X1 Carbon is powered by a 3 GHz Intel Core i5-6300U CPU that comes with 8 GB RAM and a blazing fast 256 GB PCIe-NVME SSD. ThinkPad X1 Carbon offered strong productivity and multitasking performance. Even with 14 tabs open, one of which was playing a YouTube video, we noticed no lag at all switching tasks or typing into Google Docs.

The X1 Carbon is available with both regular SATA and speedy PCIe-NVME SSDs, we recommend the latter for maximum performance. The 256 GB PCIe-NVME drive unit took just 12 seconds to copy 4.97 GB of mixed media files for a rate of 419 Mbps. That’s nearly three times as quick as the ThinkPad T460s and its 256 GB SATA drive. Its also significantly faster than the Dell XPS 13 (231.33), and just a bit quicker than the MacBook Air (358.4), both of which have PCIe drives also.

With its internal 4-cell battery, the ThinkPad X1 Carbon has enough juice to get you through a standard workday, provided that you get it with the 1920 * 1080 display. With the 1080p screen, Lenovo’s laptop lasted for 9 hours and 6 minutes on the Laptop Mag‘s Battery Test, which involves continuous surfing over Wi-Fi at 100 nits of brightness.

The 4th-generation ThinkPad X1 Carbon gets the business ultrabook formula right with a keyboard, screen and battery life that live up to their promise, wrapped up in a durable, 2.6-pound package. If you’re looking for longer endurance and don’t mind a consumer-focused laptop with a lesser keyboard, consider the Dell XPS 13 and, if you require a ThinkPad with more juice, consider the much-heavier ThinkPad T460 or smaller-screened X260.

However, if you want a sub 3-pound laptop that’s powerful enough for serious productivity work and usable enough to make you more efficient, look no further than the ThinkPad X1 Carbon.