The Chinese smartphone company Huawei recently launched its premium flagship smartphone, the Huawei P9 in US and other leading markets such as India, UK etc. The smartphone is priced at US $461, INR 39,990 and UK £449 respectively. At this price range, the Huawei P9 offers at most all the latest specifications, specially in the camera performance. It features dual 12 mega-pixel primary cameras co-engineered with German optics maker Leica, a big battery, and company’s own Kirin 955 SoC coupled with 32 GB internal storage. There is also a 64 GB storage variant but its available on limited markets only. Lets find out what Huawei P9 has to offer us in our full review.

The Huawei P9 features an all metal uni-body design. The edges all around the phone are chamfered, and it is slimmer and lighter than other flagships. The antenna lines runs across both the top and the bottom of the phone, and overall compact shape of the smartphone makes it perfect to grip in our palm. The front of the phone has the 5.2-inch screen with three Android keys are displayed on-screen and Huawei logo at the bottom. 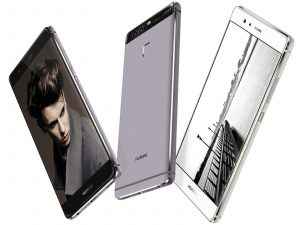 The smartphone features power and volume buttons on the left edge and the SIM and micro-SD tray on the right edge. The 3.5 mm socket, speaker grille, and USB Type-C port at the bottom. The back of the phone has the fingerprint sensor and a camera strip at the top, which feels a bit like the one on the Huawei-made Nexus 6P. On the whole, the P9 is a very good looking smartphone. 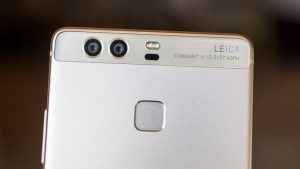 The fingerprint sensor is similar to the typical rear-mounted ones we’ve seen on many phones, with a slight depression and color matching the surrounding body. The rear positioning means that you’re more likely to use your index fingers to unlock the device. The camera strip at the back of the phone has the twin camera lenses, as well as the dual-tone LED flash and laser auto-focus window. The right side of the strip features the Leica branding.

The Huawei P9 features a 5.2-inch full HD display with 1080 x 1920 pixels of resolution with Corning Gorilla Glass protection. This leaves the smartphone far behind competing smartphones that features Quad-HD display (2560 x 1440 pixels resolution) like that of HTC 10, LG G5. But that is not deal breaking to be honest because this display really works very fine in both low-light and bright-light conditions. 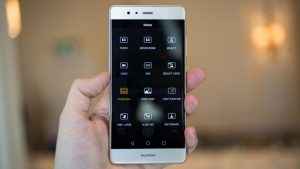 Icons and text are very sharp and quite pleasing, The use of LCD screen technology ensures blacks are nicely deep and colors have a good amount of pop, without looking over-saturated. The phone’s color temperature setting also makes it quick and easy to adjust it to meet your personal preference. Color reproduction is good as well.

The Huawei P9 runs on Android 6.0, with Huawei’s Emotion UI 4.1 on top. It is a single-layered user interface, while Android Marshmallow’s signature features including Now On Tap, Doze Mode, and the revamped apps permission system are supported. The magazine lock screen feature is interesting as always, but because the phone doesn’t need to first be woken before unlocking it if you use the fingerprint sensor, you’re unlikely to be looking at the lock screen a lot. 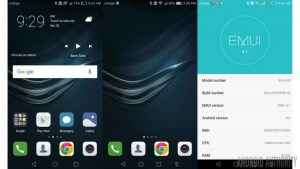 The device manager app on the smartphone gives you enhanced control over system optimization, data usage, battery consumption, and securing apps with the fingerprint sensor. You can use the sensor as a sort of tap button to trigger the camera shutter or scroll through certain screens like flicking through images in the Gallery app. Huawei’s Emotion UI is quite decent until you run out of storage and memory because of those unwanted apps.

The Huawei P9 is powered by company’s own top-end octa-core Kirin 955 SoC clocked at 2.5 GHz for four cores and 1.8 GHz for the other four. The smartphone comes with 3 GB RAM and 32 GB internal storage that can be expanded up to 256 GB via micro-SD card. At its bottom you’ll find a USB Type-C port. The Kirin 900 series has been the flagship line, and this year’s Kirin 955 finds its way into the Huawei P9. Along with 3 GB RAM, this keeps the phone running smoothly and efficiently, but it isn’t quite as fast as some of the other flagship devices we’ve used this year. 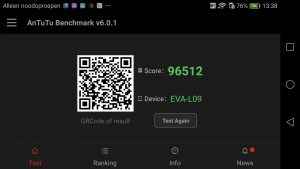 The P9 is smooth to use 99% of the time. It glides between menu screens and launches applications in milliseconds. This will make only a small difference to loading times and general efficiency around the system, and we didn’t have any serious issues while using the phone. Intensive games work well, most apps load quickly, and we didn’t face any lag or stutter when using the phone. 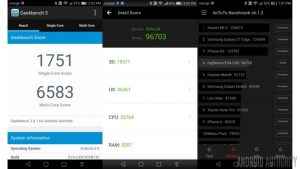 On AnTuTu, which offers a general measure of a phones’ performance, the P9 scored a respectable 96,512. These scores are pretty much in line with upper-mid-range phones, and a lot of flagships such as the OnePlus 3. The P9’s Geekbench score was a little more interesting. The P9 ran in with respectable 1,751 single-core and 6,583 multi-core scores.

The Huawei P9’s dual-lens Leica camera setup is without doubt its most interesting feature promising better-than-usual performance. Specs-wise the camera rig is pretty impressive. Each of the cameras has a 12-megapixel Sony IMX286 sensor, an LED flash and hybrid auto-focus. The only difference between the two is that one sensor is set to capture monochrome images, while the other captures the RGB (color) spectrum. 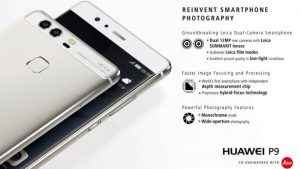 The camera has a hybrid auto-focus system that uses the laser and PDAF (phase-detection auto-focus) methods together. The use of two sensors also allows for better depth-of-field perception so you can refocus on different parts of the picture after the shot is taken. Additionally, there’s support for RAW format pictures, long-exposure night shots, and a detailed pro-shooting mode. 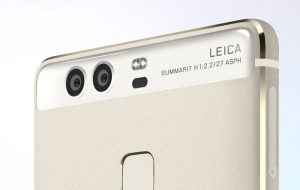 he camera takes excellent pictures which look even better in monochrome mode. Although a bit of grain is visible when you zoom in, the pictures look clean and sharp at normal scales, with great amounts of detail visible even in the darkest areas of the frame. Low-light performance is solid, but not the best we’ve seen on a smartphone. Though, images taken in dim conditions are good enough to share on social media.

With regular use, you can easily get around one to one and a half day’s use out of the phone’s non-removable Li-Ion 3,400 mAh battery. Regular use entailed taking and making a few calls, chatting on Hangouts throughout the day, sporadically checking my email and social media feeds, watching a couple of YouTube videos and intermittent music listening. The inclusion of fast charging support also makes it quick and easy to top up the phone’s battery.

The Huawei P9 is one of the best Huawei smartphone till date with its great looks and an excellent camera setup. But it isn’t quite the all-rounder that other current flagship phones have proven to be. The P9 doesn’t quite match competing handsets, such as HTC 10, LG G5, when it comes to its other hardware. Despite of excellent camera setup, the smartphone lacks optical image stabilization or 4K video capability.

But considering at the current price range, the phone’s nippy performance, robust build quality, and solid battery life mean it will meet most users’ needs. Its interesting application of two sensors and the Leica branding make this phone a great option for photography enthusiasts who like taking quick photos on the move.

The Techgadgetguides is a participant in the Amazon Services LLC Associates Program, an affiliate advertising program designed to provide a means for sites to earn advertising fees by advertising and linking to Amazon.com Inc.

How To Get Latest Tech News ? Like @Technical Guruji @Trakin Tech

Rumor: Nintendo is terminating submissions for new Wii U and 3DS eShop games