Asus’ ZenBook Flip has an attractive aluminum design that comes in Gold and Dark Grey color variants. Asus’ logo is printed on the lid surrounded by faint concentric circles as it has used this color and general design on several of its ZenBooks for a while now. Lifting the lid reveals the 1080p touch screen, island-style keyboard and a spacious touch-pad. 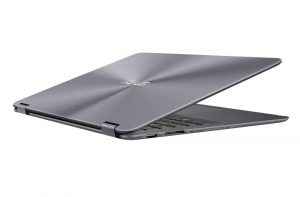 The ZenBook Flip’s sides are lined with just enough ports to support your most important peripherals. On the left side is a USB 3.0 port and an SD card reader, while the right side is home to USB 3.0 and Type-C ports, a micro HDMI and a headphone jack. As a 2-in-1, the ZenBook Flip can be used in four different modes: a laptop, a tablet, a stand, and a tent. The 720p webcam on the ZenBook Flip is as same as that of ZenBook UX305CA and is good for normal use. 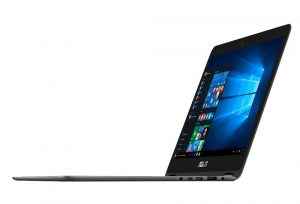 The ZenBook Flip comes with a full-sized chiclet keyboard that gives you clicky feel while typing. The keys on this keyboard requires 59 grams of actuation force. The keys are quite responsive and gives you a perfect platform to type on. Unfortunately the keyboard does not have back-lighting, but that is certainly not a deal breaking factor. 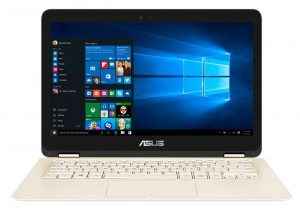 The 4.1 x 2.8-inch touch-pad provides plenty of room for Windows 10 gestures. The scrolling, two finger gestures are quite smooth, with out any lag. Overall, the touch-pad is accurate and will never stuck while working.

The Asus ZenBook Flip features a 13-inch Full-HD (1080p) display that produces vivid colors and gives you almost 180 degree wide viewing angles. The screen’s average brightness was 298 nits. The Spectre was even brighter at 308 nits, while the Inspiron 13 (244 nits) and the Yoga 710 (288 nits) were both dimmer. 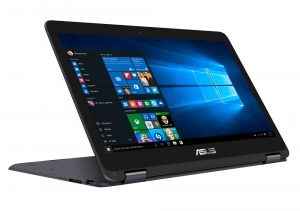 The ZenBook Flip is integrated with an Intel HD Graphics 515 GPU which isn’t meant for heavy gaming. The notebook earned a score of 52,374 on the 3DMark Ice Storm Unlimited graphics benchmark, just surpassing the category average of 51,412. The Inspiron 13 and the Spectre, both with Intel HD Graphics 520 GPU, were better at 61,252 and 62,054, respectively. The Yoga 710’s discrete Nvidia GeForce 940MX GPU was the strongest with a score of 80,223. 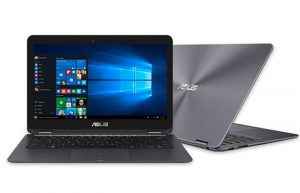 As for the audio, a pair of speakers are hidden underneath the laptop, which means sound is easily muffled by the surface it’s placed on. When they’re unobstructed the speakers sound strong, and even produce a slight hint of bass. The positioning makes them unreliable; depending on the situation, they can sound strong and clear, or weak and muddy.

The Asus ZenBook Flip is powered by Intel Core m3-6Y30 CPU which is clocked at 0.9 GHz that can be powered up to 2 GHz. The Laptop comes with 4 GB/8 GB RAM and 128 GB/  256 GB/ 512 GB SSD storage variants. Despite its low clock speed, the ZenBook Flip is  able to multitask without breaking too much of a sweat. Even with several tabs open in Google Chrome, and running a 1080p video side by side, the laptop doesn’t shows any signs of lag or any other interruption. 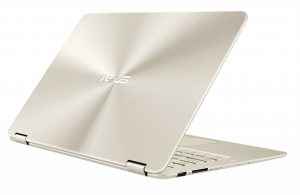 The ZenBook Flip has a fanless design that stayed nice and cool. As per the Laptop Mag’s heat test, after streaming more than 15 minutes of HD video from YouTube, the bottom of the laptop reached 94 degrees Fahrenheit, the center of the keyboard hit 83 degrees and the touch-pad measured a cool 79 degrees. Each of these measurements are below comfort threshold of 95 degrees.

The ZenBook Flip lasts far longer than other 13-inch 2-in-1s on a single charge. As per the Laptop Mag’s battery test, which continuously browses the web over Wi-Fi, the ZenBook Flip lasted for almost 10 hours. the Yoga 710 (8:55) and the Spectre (8:26) at least an hour behind the Asus. The Inspiron 13 had the worst battery life of the group (7:06).

The Asus ZenBook Flip UX360CA surely turned out to be an affordable and lightweight notebook with a strong build quality and fanless design. It has a vivid display that you can customize to your liking, and you won’t spend too much time uninstalling junk from your machine. The best part about this 2-in-1 is its long battery life. Though, it is true that laptop do struggle in terms of performance as it comes with Core M processor. But for a normal user won’t face any problem in terms of performance. 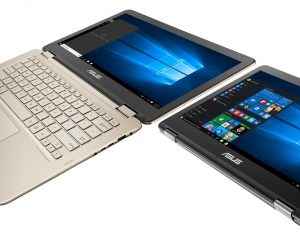