After the success of Huawei P9 smartphone, Huawei recently launched yet another mid-ranged smartphone, the Huawei Honor 8 under its Honor branding. And just like the P9, the biggest highlight of the Honor 8 smartphone is its dual-rear camera setup which gives some great photography experience for the users. The Huawei Honor 8 comes with a starting Price of US $349 on Amazon.com. People living in India can grab the Huawei Honor 8 at INR 28,999 via Flipkart. Huawei is surely giving a lot in Honor 8 at this price range, but does it worth it? Well, you’ll get all your answers in our review. 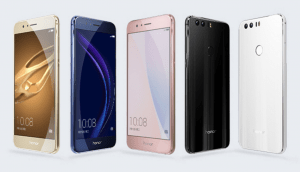 Undoubtedly, the Huawei Honor 8 is an absolute gorgeous looking smartphone at the first look. The glass finish on both front and rear panel of the smartphone gives it a premium look. Holding the device in your palm gives you the similar premium feeling that you get while holding Asus Zenfone 3 or Xiaomi Mi 5 as both the smartphones comes with glass finish. Now, despite the metal body, handling can be a bit challenging due to the device’s slippery glass profile. You’ll want to be especially careful when setting the Honor 8 down, especially on uneven surfaces, just like Zenfone 3 and Mi 5. 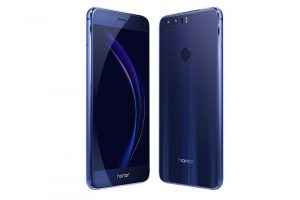 Both glass panels curve down to meet with the chamfered aluminum band, which gives an impression of cohesion. The tactile power and volume buttons are located on the right edge of the phone. There is a nice texture on the power button. There is an IR blaster at the top of the device which can be used to control TVs and other household appliances. The IR blaster is a valuable addition and does works fine. 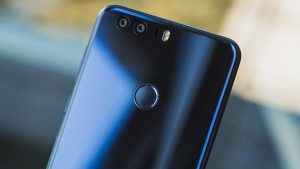 Smartphone also features a fingerprint scanner on the back. Huawei calls it a “smart key,” as you can program different shortcuts including flashlight, screenshot, or voice recording to tap, double tap, and hold. You can also have it open an app instead, if you find that useful. It’s a pretty nifty idea, and I’ve found my settings for double tap for flashlight and hold for Google Now to be quite handy. 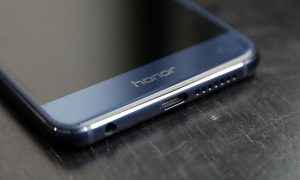 Coming to other specs, there’s a notification LED neatly hidden in the earpiece grille; an infrared emitter on the top; a USB Type-C port on the bottom (USB 2.0 speed); and a SIM and microSD card tray (up to 128GB) on the left. Although the SIM slot has a physical cutout for a second Nano-SIM, the phone won’t recognise it. The smartphone weighs 153 grams that makes it comfortable while using with one hand.

The Huawei Honor 8 features a 5.2-inch Full-HD (1080p) LTPS display which looks great and produces a good amount of sharpness, saturated and punchy colors. Though, this display is not as sharp as that of HTC 10, LG G5 that features Quad-HD (1440p) display. But, that is not deal breaking to be honest because this display really works very fine in both low-light and bright-light conditions. Also, both HTC 10 and LG G5 features a bigger 5.5-inch displays and are much costlier than Honor 8. 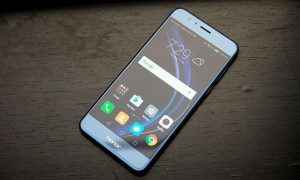 The smaller display size does make handling easier in comparison to larger devices on the market. In fact, the Honor 8’s smaller size may seal the deal for some, as we rarely see this, especially at this price. The phone’s color temperature setting also makes it quick and easy to adjust it to meet your personal preference. Color reproduction is good as well. The display brightness maxes out at 455 nits, which is about average ut is good for a 5.2-inch display.

The Huawei Honor 8 on Android 6.0, with Huawei’s Emotion UI 4.1 on top. It is a single-layered user interface, while Android Marshmallow’s signature features including Now On Tap, Doze Mode, and the revamped apps permission system are supported. The magazine lock screen feature is interesting as always, but because the phone doesn’t need to first be woken before unlocking it if you use the fingerprint sensor, you’re unlikely to be looking at the lock screen a lot. 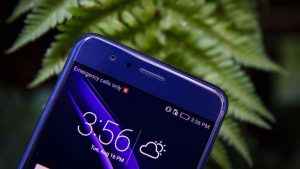 Some of Huawei’s additions are certainly appreciated, but a lot of them can come across as gimmicky. For example, the knuckle gestures are cool in theory, but don’t always work in practice. There’s also a good number of bloatware apps, which is quite unfortunate. We wished that Huawei would have approached software wholeheartedly and made more refinements instead of including a bunch of features that few people will actually use.

On a positive note, Honor has committed to updating the Honor 8 with new features every three months for the first year, and then providing security and bug fix updates for an additional year. The Honor 8 will also receive the Android 7.0 Nougat OS update which is great to see, especially at this price. 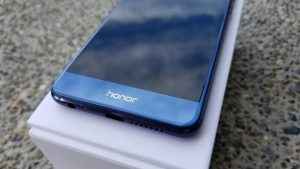 The Huawei Honor 8 is powered by company’s HiSilicon Kirin 950 chipset clocked at 2.3Ghz. The Kirin 950 is easily comparable to the Qualcomm’s Snapdragon 820 in terms of performance. The smartphone comes with 4 GB RAM and 32/64 GB internal storage variants. In terms of graphics, the Honor 8 comes with Mali-T880 MP4 GPU which is quite good for gaming, but is not as powered as high-end Adreno GPUs. The smartphone offers expandable storage via a microSD card slot and can accept cards of up to 128 GB in size.

The Honor 8 aces most mundane jobs and easily handles multitasking. Even visually demanding games like Mortal Kombat X work smoothly. We didn’t face any heating issues, even during gaming, but our review unit had a bug which made the phone scalding hot every time we fired up the camera. Honor tells us that it’s most likely an isolated incident since ours was a pre-production unit, and that retail devices should work normally. 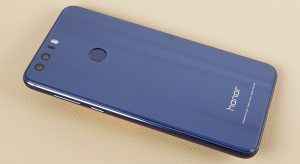 The speaker is decent; it gets the job done, but sounds hollow and distorted. We would say that it performs slightly below average overall. The fingerprint reader on the back of the Honor 8 is quite good. It is fast while still being accurate.

The highlight of the Honor 8 is indeed its dual camera setup, which offers two 12 mega-pixel sensors on the back. One sensor reads RGB data while the second monochromatic data, both of which combine to produce images with more depth and accurate colours. The front camera is an 8 mega-pixel unit with an f/2.4 aperture. Both the cameras gets job done, but do have some limitations of there own. 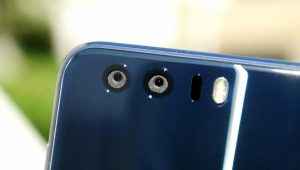 The Honor 8 takes great, contrasty images with a good amount of sharpness and excellent dynamic range. The sensors produce good background blur but you can take this one step further with ‘Wide aperture’ mode. Here, you can adjust the amount of background blur using a slider near the focus reticule, from f/16 to a simulated f/0.95. Low-light stills exhibit a small degree of noise and detail level is a bit less, but quality is still well within bounds. 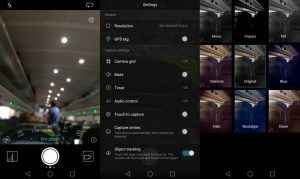 Unfortunately, there’s no 4K video recording, and you’re limited to 1080P/60p. That’d be acceptable on its own given the phone’s price, but the video quality itself is poor as well with disappointing colors. The camera app is fairly nice, and offers some very useful manual controls. Unfortunately, they don’t rotate when switching to landscape mode, which is quite annoying.

The Honor 8 packs in a non-removable 3,000 mAh battery that supports fast charging and comes with three battery profiles out of the box: performance, smart, and ultra. Battery life is long enough to get most light to moderate users through a full day of use, but heavy users may need to charge up more than once per day. The users can also switch between the three battery profiles as per there needs. 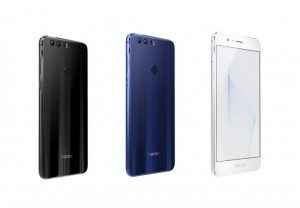 Being categorized in the mid-ranged price group, the Huawei Honor 8 delivers very well in all aspects like its beautiful design, sleek and premium finish, an excellent performer in terms of multi-tasking, gaming, and an average battery life. The smartphone also comes with a good camera setup which surely performs well, but do struggle in some features like absence of 4K video recording and a lots of bloatwares.