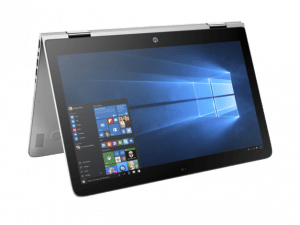 The design of Spectre x360 is simple, smooth and shiny. It somehow resembles the look of MacBook because of its silver and aluminium body. The lid and the bottom of the laptop are made of silver-aluminium with HP’s logo on the top of it. Spectre logo can be found on the hinge located at the back of laptop. It can be seen when the laptop is closed or is in the tent mode. Under the lid, there is an island-styled keyboard flanked with speakers on its either side and a 15.6-inch 1080 p touch screen. 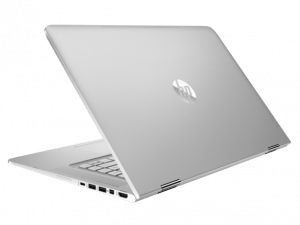 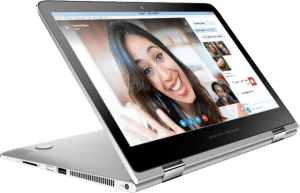 Coming to the ports, Spectre x360 sides are packed with plenty of ports, including the latest Type C version USB port. The left side of the laptop consists power port, a USB 3.0 port, headphone/mic combo jack and an SD card reader, while the right side of the laptop, you will find HDMI and mini Display-Port for external monitors, two more USB 3.0 ports and a USB Type-C port that transfers data and power to other devices but cannot be used to charge the laptop itself. The Laptop has a 1080 p Webcam. 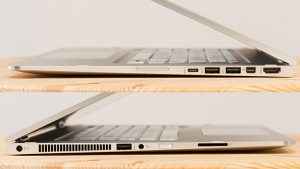 With 1.4 mm of travel, the keyboard on the Spectre x360 15 t feels shallow, though the 60 grams of force required to press the keys gives it a clicky feel. That’s better than the Dell Inspiron 15 7000 keyboard’s 1.2 mm of travel, which bottomed out too quickly and was hard to type on. 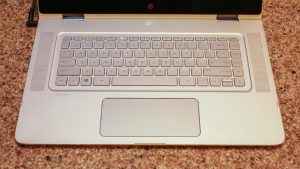 The beautiful and spacious touch-pad on the Spectre is 5.5 by 2.6 inches and the pad provides plenty of room for navigating with your mouse and performing swipe gestures in Windows 10. There is absolutely no problem while scrolling through Web pages, pinching to zoom and swiping windows into the task bar.

The Spectre x360 features a 1080 p bright touch screen that produces vivid colors, however not always accurate. The viewing angles on x360 are quite strong and gives clear images almost 90 degrees. The display is fairly luminous at 246 nits, which is brighter than the Inspiron 15’s 209 nits but dimmer than the Satellite Radius’ 263 nits.

The Spectre produces an impressive 118.6 percent of the sRGB color gamut (100 percent is excellent) which is higher than the Satellite Radius (109.6 percent) and nearly double the Inspiron 15 7000 (62 percent). 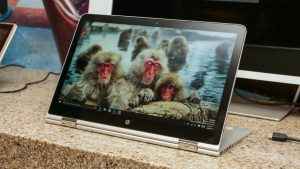 The display of Spectre x360 lacks in its color accuracy. The Spectre x360 15 t has a Delta-E score of 4.06 (closer to zero is better), which is much higher when compared with Inspiron 15 and Satellite Radius that are much more accurate with scores of 0.7 and 0.81.

Also, the Bang & Olufsen speakers on the Spectre x360 are quite powerful and makes the sound quality of Spectre x360 very impressive.

HP Spectre x360 15 t features a 2.3 GHz Intel Core i5-6200 CPU that comes with 8 GB RAM and 256 GB SSD which is more than enough to perform for both your work and play. As per the reports of performance test done by Laptop Mag, the device didn’t lagged until eight tabs were open on Chrome web-browser. Also, the lag was minimal.

Also, as per the heat test done by Laptop Mag, The Spectre x360 15 t stayed cool throughout. After streaming a 15 minutes HD video, the underside hit 94 degrees Fahrenheit, just under the 95-degree comfort zone. The touch-pad stayed cool at 81 degrees and the spot between the G and H keys on the keyboard reached 88 degrees.

If you need your large 2-in-1 to last all day, the Spectre x360 15 t is a great choice. The company claims that Spectre x360 15 t can last up to 13 hours on its battery. Beating its competitors by a wide margin, HP’s 2-in-1 lasted a strong 8 hours and 27 minutes on the Laptop Mag Battery Test, which surfs the Internet continuously at a brightness of 100 nits. The Dell Inspiron 15 7000 lasted just 5:33, and the Toshiba’s Satellite ran out of juice at 5:14. 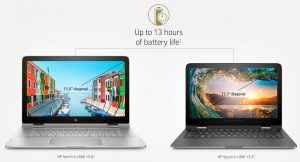 The Spectre x360 15 t is the best no doubt the best 15-inch 2-in-1 laptop. Credit goes to its strong combination design, display quality, audio and endurance. However, the price of Spectre x360 is considered to be its drawback as Dell’s Inspiron 15 7000 offers you the similar specifications at $800 (approx Rs 53,800). Also, like many other 2-in-1 laptops, the Spectre x360 is not meant for the game lovers as it does not offers you highly configured graphic options.