The Chinese Tech giants Xiaomi is all set to launch its new Redmi 4 and Redmi Note 4 smartphones at an event in China tomorrow. The company has released teasers where two of its brand ambassadors are holding a smartphone, and has announced that ‘a new Redmi product’ is joining the family. It is also expected that company might launch only the Redmi 4 Smartphone tomorrow instead of revealing both the smartphones.

The teasers were released on the company’s forum confirming the earlier reported release date for the Redmi 4 smartphone, i.e. August 25. The Redmi 4 has been subjected to numerous leaks and it is expected to feature a full metal body. In the teaser, actress Liu Shishi is holding a metal device further attesting to it, while actor Wu Xiubo is seen holding a glowing smartphone. 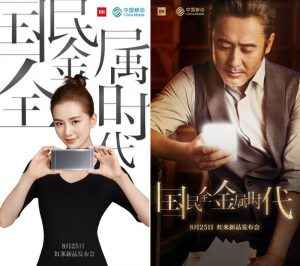 The Xiaomi Redmi 4 is a mid-ranged phone and is also the successor of the Xiaomi Redmi 3 smartphone. The phone is expected to arrive with a 5-inch 1080p display, Snapdragon 625 processor, 3 GB RAM, 32 GB of internal storage, and a 4,100 mAh battery. The phone is also said to come with a metal uni-body, 13 mega-pixel rear camera, 5 mega-pixel front camera and will run on Android Marshmallow 6.0 OS.

On the other hand, the Redmi Note 4, which was earlier expected to be launch on July 27, but company launched Redmi Pro at that time. The Redmi Note 2 is expected to have 5.5-inch full-HD (1080 x 1920 pixels) IPS display, powered by MediaTek Helio X20 deca-core processor that will come with 3 GB RAM and 32 GB/64 GB internal storage options (expandable via micro-SD card). The camera on the Redmi Note 4 is said to be the same as the Redmi 4, and it is expected to feature a 4,000 mAh battery.

Meizu launched YunOS-Powered U10 and U20 smartphones in China: Price and Specifications