Xiaomi has recently launched its new smartphone under the Redmi Series, the Xiaomi Redmi Pro, that come with 5.5-inch HD OLED display, Helio X25 SoC and offers dual camera setup. Now, it seems that the company will offer a smaller sibling of the Redmi Pro smartphone which is dubbed to be named as Redmi Pro Mini.

According to the Chinese website Weibo, the company will launch the new Redmi Pro Mini smartphone with a 5.2-inch OLED display, down from 5.5″ on the ‘normal’ Pro thus adding a new smartphone to its Redmi series. The smaller phone won’t keep the bigger one’s dual camera arrangement on the back instead it will just have one camera and a dual-tone LED flash. 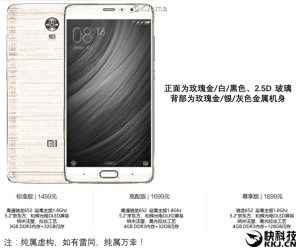 Regardless of which variation you go with, you’ll receive a handset with 2.5D curved glass on the front, a fingerprint scanner embedded in the Home button underneath the display, 18W charging (9V 2A), and a 4,000 mAh battery.

The availability of the Redmi Pro Mini is yet unknown, but we do expect to hear a lot about the smartphone in the next few weeks.