The Chinese Tech Giants Xiaomi is all set to launch the new Xiaomi Mi 5s smartphone for which the company has scheduled an event at the China National Convention Centre in Beijing on September 27. The smartphone is said to be the successor of the Xiaomi Mi 5 smartphone that was launched earlier this year. Yesterday, the company has also shared an image that reveals the benchmark score for the upcoming smartphone. 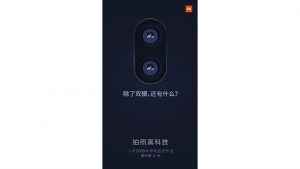 Now, as per the recent reports, company has shared a new teaser that reveals that the smartphone will feature a dual-rear camera setup. The teaser shows that the dual camera setup is placed vertically and most likely around the centre of the handset. Also, the image teased by Xiaomi shows a score of 164,119, which is higher than the one seen LeEco Le Pro 3 (163,594), thus putting the Mi 5s back on top.

Also, as per the Phone Arena, Xiaomi might launch the Xiaomi Mi 5s as the Xiaomi Mi Note S. In response to an inquiry on a Chinese social media board, Xiaomi allegedly responded by saying that there is no Mi 5s. This means that the ‘S’ teaser revealed by Xiaomi was not meant for the Mi 5s but the Mi Note S. However, after the many leaks on the web, including an AnTuTu benchmark score, the probability of a Mi 5s is still pretty high. 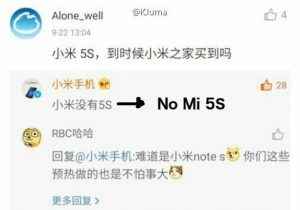 The display of the smartphone is said to be 5.15-inch full-HD (1080p) with Force-Touch features. The smartphone will be equipped with a 16 mega-pixel rear camera with f/1.8 aperture and features 4 axis optical image stabilization (OIS) and phase detection auto-focus (PDAF). The device will be backed by a 3,490 mAh battery and will features Qualcomm’s fast charging 3.0. The smartphone will also features Type-C USB port, Bluetooth 4.2, and Qualcomm’s ultrasonic fingerprint scanner. (Read More)