Along with the Mi Note 2, the Chinese Tech Giants Xiaomi also introduced, what they are saying to be the ‘Phone of the Future’ the Xiaomi Mi Mix. One of the most exciting feature of the Mi Mix is its bezel-less display. The new phone has been designed by French designer Philippe Starck. The Mi Mix resembles a slab of glass, but Xiaomi says it is using high-grade ceramic for this ‘concept phone’. Xiaomi is using “seamless connectors to fuse Mi Mix’s body without any external adhesives”.

The Mi Mix comes with a 6.4-inch display which is edge-to-edge, and Xiaomi says this will come with a custom 17:9 ratio aspect. The display is a custom one with a narrower border, and unlike most regular smartphones it doesn’t have a selfie camera or a proximity sensor on top. Instead Xiaomi has put the front camera at the bottom of the phone, which will rotate on its own when a user wants to take selfies. 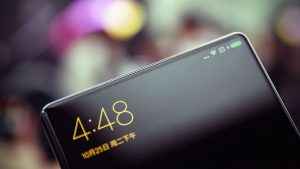 Xiaomi’s says the phone will have a 91.3 per cent screen-to-body ratio and they will be “maximizing the screen space” to give the users a “better content viewing experience.” The Mi Mix smartphone will have a ceramic acoustic system, and an ultrasonic proximity sensor embedded inside the display along with a compact front camera. Xiaomi claims this front camera is 50 per cent smaller than other front cameras. 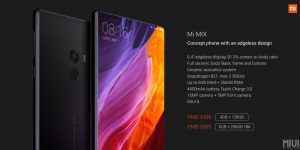 The 18K gold version of the Mi MIX has gold rims around camera and fingerprint sensor. This is Xiaomi’s first concept phone, and it remains to be seen how it does in the market. On first appearance, it looks like quite a stunning design, especially given the edge-to-edge display. Xiaomi has not announced if it plans to bring this phone to other countries as well.