Xiaomi all set to launch Redmi Pro on July 27: Features and Specifications

The Chinese Smartphone manufacturer Xiaomi is all set to launch the Redmi Pro smartphone on July 27. The report is confirmed by the company on the Chinese website Weibo. Earlier, it was expected that the Xiaomi might launch the rumored Redmi Note 4 on July 27, but with the recently leaked specifications and rumors, it is possible that the Redmi Pro may indeed be the Redmi Note 4, only under a different name.

With the popularity of the Xiaomi’s recent offering, the Xiaomi Redmi Note 3, leaked suggested specifications of the Redmi Pro are suited for the mid-tier market. As per the Digit, Redmi Pro might be launched in two different variants – one with a 2 GHz MediaTek Helio X20 SoC, 3 GB RAM, and the other with a 2.5 GHz Helio X25 SoC and 4 GB RAM. 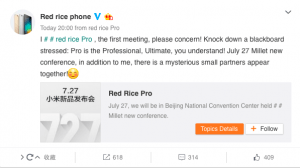 Xiaomi will also be launching another device alongside the Redmi Pro, dubbing it the “mysterious little friend” as reported by Weibo. As speculated by rumors, this mysterious device could be the Xiaomi’s first laptop which is also expected to be launch on July 27.

As per the International Business Times, Xiaomi’s Mi laptop may come in two variants- one with 12.5-inch, and the other with 13.3-inch screen. Both the variants are expected to be powered by an Intel Atom processor. However, DigiTimes earlier reported that the Notebook will be jointly developed by ODM partners Inventec and Foxconn, would measure 15-inch, run Linux operating system and priced at CNY 2,999 (approx US $448/ INR 30,000).