The Chinese Tech firm Xiaomi is reportedly working on a new smartphone, the Xiaomi Meri. The smartphone was earlier thought to be the Mi 5c, until recently, the smartphone surfaced on the AnTuTu and Geekbench listings. Both the listings revealed some of the key specs of the smartphone.

Starting with the Geekbench, Xiaomi Meri is reported to come with 3 GB RAM. The chipset under the hood wasn’t listed, but we can see that it features an octa-core CPU which was clocked at 1.4GHz for the test. The smartphone will run on Android 6.0 Marshmallow OS out of the box. Both times the phone went through Geekbench, it scored 758 for its single-core score. The multi-core scores were 3105 and 3043. 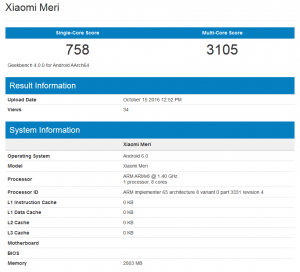 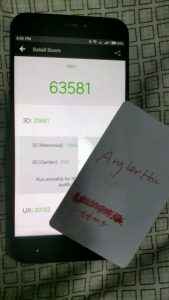 On AnTuTu, the Xiaomi Meri scored 63,581, well under the 150,000-175,000 that high-end handsets are scoring. That gives the phone a mid-range status. The AnTuTu test shows a screen size of 5.5-inches, which is larger than the 5.1-inch screen that was earlier rumored for the device. It does confirm that the display features a 1080p resolution and the Mali-T864 GPU is under the hood. There could be a Rockchip SoC running the show with four Cortex-A53 cores rocking a maximum clock speed of 2.2GHz, and four more Cortex-A53 cores running no faster than 1.4GHz.

There’s not much information on the smartphone, regarding the availability and price details of the smartphone, but the company could make it available this quarter, possibly at the end of this month. However, that’s just a rumor at this point and should be taken with a grain of salt. Stay connected for the further updates.