Lenovo’s upcoming smartphone, the Lenovo Moto M is yet another mid-ranged smartphone by the company after the much popular Moto G4, G4 Plus and G4 Play. And as per the fresh reports, some leaked images of the smartphone has been surfaced online, thus revealing the design and the complete specifications of the smartphone.

As per a new leaked image of specifications, the Moto M is reported to run Android 6.0 Marshmallow out-of-the-box. The smartphone is said to be powered by a Qualcomm Snapdragon 625 processor, coupled with either 3 GB or 4 GB  RAM. The smartphone is also reported to pack an Adreno 506 for graphics capabilities in it. The report adds that the Moto M will be launched in December.

Read: Lenovo Z2 Plus smartphone is now available in India on Amazon Exclusive 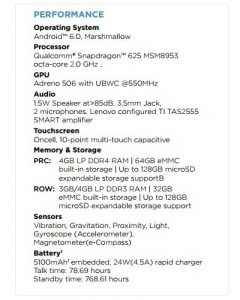 Also Read: Lenovo P2 with 5,100 mAh battery and Lenovo A Plus smartphones are now official

As far as the camera setup is concerned, the Moto M is said to feature a 16 mega-pixel rear camera and an 8 mega-pixel or 5 mega-pixel selfie snapper. The Moto M is also said to have Lenovo-configured 1.5W speakers with SMART amplifier. It should also have 2 microphones, one is audio receptor while the other is the noise cancelling unit. A 3.5 mm headphone jack is also reported to be present on the top the phone. Stay connected for the further updates.