The Galaxy On7 smartphone features a 5.5-inch Full-HD (1080p) TFT display. The smartphone is powered by 2 GHz octa-core Snapdragon 625 processor coupled with Adreno 506 GPU. The smartphone comes with 3 GB RAM and 32 GB internal storage that can be further expanded up to 256 GB via micro-SD card. The smartphone will run on Android 6.0.1 Marshmallow OS and comes with hybrid dual-SIM slots. 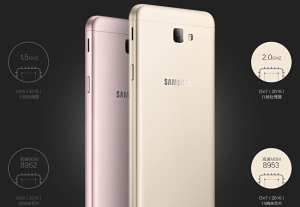 The Galaxy On7 smartphone is backed with a 3,300 mAh battery and supports fast charging, though details of the quick charging speeds haven’t been released. The device measures 151.7 x 75 x 8 mm and weighs 167 grams. The smartphone supports 4G LTE, GPRS/ EDGE, Wi-Fi 802.11 b/g/n, Bluetooth v 4.2, and GPS. The Galaxy On7 (2016) comes with Samsung’s Knox security suite of apps.

Asus Zenfone 3 Deluxe and Zenfone 3 Laser are now available in US: Price and Specifications