The Galaxy A9 Pro was launched in China earlier in March, earlier this year. The smartphone bears some upgrades compared to the Samsung Galaxy A9. The smartphone comes in metal and glass design and comes with 4GB RAM, a 5000mAh, and a 16 mega-pixel camera instead of 3GB of RAM, a 4000mAh battery, and a 13 mega-pixel camera as was seen in Galaxy A9. Samsung Galaxy A9 Pro is just 7.9mm thick, features a narrow bezel of 2.7mm and weighs around 210 grams. 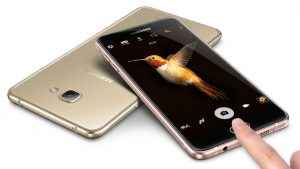 Specifications of Samsung Galaxy A9 Pro

The Samsung Galaxy A9 Pro features a 6-inch Full-HD (1080p) Super-AMOLED display protected by Corning Gorilla Glass 4. The smartphone is powered by 1.8 GHz Qualcomm Snapdragon 652 octa-core processor that comes with 4GB RAM and 32GB internal storage that can be expanded further up to 256 GB via micro-SD card. The dual-SIM (Nano-SIM) Samsung Galaxy A9 Pro runs Android 6.0 Marshmallow OS.

On the camera front, the smartphone features a 16 mega-pixel rear camera with LED flash, an f/1.9 aperture, and optical image stabilisation (OIS), apart from an 8 mega-pixel front camera that also bears an f/1.9 aperture. The device is backed with a 5,000 mAh battery and also offers fingerprint scanner, fast charging, Knox security and screen mirroring among many options. On the connectivity front, there is WiFi 802.11ac, Bluetooth 4.2, ANT+, USB 2.0 and NFC. Sensors on the phone include proximity sensor, ambient light sensor, accelerometer, magnetometer, and gyroscope.

Mitron may find its place back on Play Store, chances thin for Remove Chinese Apps, Google clarifies why it removed apps