Samsung is rumored to be soon launching the Galaxy On7 (2016). From the recent sources, the smartphone has been spotted on the bench-marking website Geekbench, thus revealing few key specs and features of the smartphone. According to the Geekbench listing, the Galaxy On7 will be powered by Exynos 7870 chipset which was earlier rumored to be powered by Qualcomm’s Snapdragon processor by GFXBench listing (via GSM Arena).

Apart from the Exynos 7870 chipset, the Geekbench listing also revealed the 3 GB RAM and Android Marshmallow OS on the Galaxy On7. As per SamMobile, the Snapdragon variant is headed towards China, while the Exynos-powered variant will soon be launched in India. The leaks also suggest that the Galaxy On7 (2016) will also be equipped with a fingerprint scanner which was missing on the previous Galaxy On series smartphones. 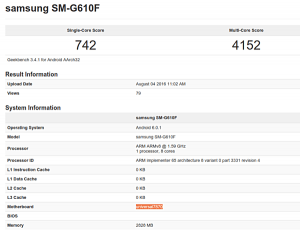 The Samsung Galaxy On7 (2016) is said to be an upgraded version of Galaxy On7 (2015) and is expected to feature 4.8-inch full HD (1920 × 1080 pixels) display, which is a bit surprising when you consider the previous models featured a 5.5-inch display. The smartphone is also expected to come with a 13 mega-pixel rear camera, and an 8 mega-pixel selfie camera.