With the launch date coming near, the leaks are turning into a steady flow of information about Samsung’s next Note, The Galaxy Note 7. Here’s one of the clearest real world images of the Galaxy Note 7 that we’ve seen so far. This is the Black Onyx version of the device as per the Android Authority. 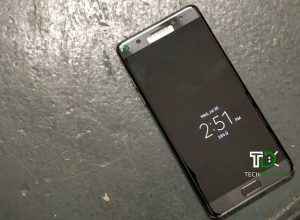 Samsung is all set to announce the Galaxy Note 7 officially on August 2 at the Samsung Unpacked event. Regardless the actual specs of the Galaxy Note 7 that are to be revealed by the company on its launch event (August 2), rumors have suggested it will have a 5.8 inch dual-edged display like the Galaxy S7 edge.

Earlier on July 20, the famous Evan Blass tweeted an image of the Galaxy Note 7 that reveals the phablet’s dual curved edges, the USB Type-C Port, the push-to-eject pen and the embedded finger print sensor.

Samsung's Galaxy Note7 is a big bet that may pay off for the entire industry https://t.co/eIJk8V6biH pic.twitter.com/mLDhmEpvuB

Also, the previous images leaked by the Evan Blass reveals the front and rear mug shots of the device in three different colors:- Black Onyx, Silver Titanium and Blue Coral.

As per the Android Authority, the video below, comes courtesy of accessory maker Olixer, which was testing the tantalizing tech with a trio of of screen protectors and shows off just how seemingly bezel-less the phone is, as well as the sheer sheen and substance of the sliding sides:

The Galaxy Note 7 is expected to be launched on August 2nd as confirmed earlier. While the specs are seemingly solidified, there are still some points to ponder, namely if there will be a “non-edge” variant, if the phone will in fact, have just 4 GB of RAM, and how well the iris scanner will work in real life use. There are also rumors suggesting the device will literally go on sale the day it’s announced.

Samsung Notebook 7 Spin, the 2-in-1 convertible Laptop now available in US: Price and Specifications