Just like every year, Samsung will unveil its next offering sometime in the second half of 2016. But before that, leaks have been in abundance, and the latest gives us more details on the dimensions, a switch to USB Type-C, and a possible addition of an Iris scanner. 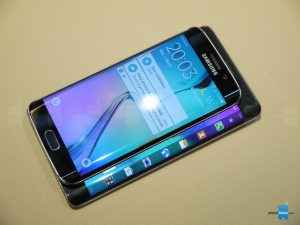 As per the reports of International Business Times, the blueprints of the Samsung Galaxy Note 6 Edge have been revealed by Steve Hememerstoffer (aka @Onleaks) from Nowhereelse.fr exclusively to uSwitch. The Note 6 Edge is expected to sport a design that is similar to Galaxy S7 Edge. However, it can be seen with additional features such an S-Pen stylus and USB Type-C port.

The Galaxy S7 Edge has a 5.5-inch display, but the Note 6 Edge is expected to come with a 5.7-inch or 5.8-inch screen. The blueprint suggests that the smartphone features a dual-edge curved display. The area above the display features a couple of sensors. The proximity and ambient sensors seem to be present on the left side. On the right, two black dots are present. Rumors have it that one of them is an Iris scanner that will allow users to unlock the device by scanning the retina. The other seems to be an LED flash for the selfie camera.

As previously reported, the Galaxy Note 6 is expected to be unveiled early in August to fend off iPhone competition. Leaked specifications so far include a 5.8-inch Q-HD (Quad-HD)display, a Snapdragon 823 SoC paired with 10 nm 6 GB of RAM module, 32 GB inbuilt storage that can be expanded via micro-SD card, a 12-megapixel rear camera, and a Dual Pixel setup in the front.