The Galaxy C9 is the third smartphone after the Galaxy C5 and Galaxy C7 smartphones that were introduced by the company earlier this year. Now, according to the GFXbench, the Galaxy C9 will features a 6-inch Full-HD (1080p) display, 6 GB RAM and 64 GB internal storage. GFXBench is the third bench-marking site that reports 6 GB RAM for this smartphone.

Read: Samsung Galaxy On8 goes official, will be available from October 2 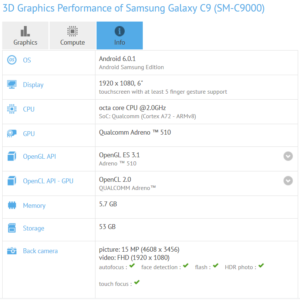 The smartphone is said to be powered by Qualcomm’s 64-bit Snapdragon 652 octa-core processor clocked at 2.0 GHz and Adreno 510 GPU. There will be 16 mega-pixel rear camera and a 16 mega-pixel front camera as well. The smartphone will run on Android 6.0.1 Marshmallow OS out of the box here, and on top of it, you’ll get Samsung custom UI.

Just like the Galaxy C7 and C5, the Galaxy C9 will be made of metal uni-body. The Galaxy C9 will actually sport a very similar design to its siblings, though it will come in a larger form factor, of course. The physical home key will be placed below the display, and it will double as a fingerprint scanner, as is the case with a number of other Galaxy-branded smartphones. There is still no information regarding the price and availability of the smartphone. Stay connected for further updates.

Huawei Honor 6X reported to be launch on October 18