Samsung recently launched the Galaxy C9 Pro smartphone in China. The smartphone sports a huge 6-inch Full-HD (1080p) AMOLED display and a hefty 6 GB RAM. The smartphone will be available for purchase in China via Samsung’s China store starting November 11, with the pre-orders having already started. The smartphone is priced at CNY 3,199 (approx US $474 or INR 31,700).

Now, as per the recent reports, the Galaxy C9 Pro smartphone has been spotted online on Indian imports tracker website, Zauba. The Zauba listing on the device shows the phone as a device code ‘SM-C7010’ and is listed as ‘for testing’ devices. Four devices have been shipped on October 26, and are listed as INR 13,645 each. Though, the regular Galaxy C7 is priced close to INR 32,000, which clearly means that the price on Zauba is not representative of its market value.

Read: Samsung Galaxy On Nxt is now available on Flipkart: Price and Specifications 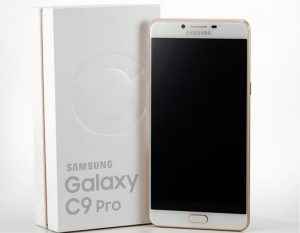 The specifications of the Samsung Galaxy C9 Pro are similar as was earlier listed by GFX Benchmark listings. The dual SIM (Nano+Nano) 4G-enabled Galaxy C9 Pro runs on Android 6.0 Marshmallow out-of-the-box. The smartphone features a 6-inch Full-HD (1080p) AMOLED display and is powered by an octa-core Qualcomm Snapdragon 653 SoC, with four cores clocked at 1.95GHz and the rest at 1.4GHz. Samsung has equipped the device with 6 GB RAM.

On the camera front, the Galaxy C9 Pro features a 16 mega-pixel camera on both front and rear. The rear 16 mega-pixel camera comes with an aperture of f/1.9 and a dual-LED flash. The selfie camera too has the same aperture except the flash module. The smartphone packs inbuilt storage of 64 GB that is expandable via a microSD card (up to 256 GB).