Oppo is all set to launch a new flagship smartphone, the Oppo R9s in the coming time. The smartphone has long been in the rumor mills and is said to be the successor to the selfie-centric R9 smartphone, that was launched earlier this year. The company will be holding an event on October 19 to launch the smartphone. The smartphone will follow the same trend as of its predecessor with its USP being selfie camera.

Now, just ahead of the official launch date, the smartphone is leaked in fresh images, thus giving us an idea of how the smartphone will look like. The smartphone will come in an all-metal body along with a new antenna line design, some what similar to the R9. At the back, the smartphone has a camera lens along with flash followed by an OPPO logo at the center. On the front, the smartphone houses a physical home button that might double as a fingerprint scanner. The volume rocker keys are placed on the left while the power button and the SIM slot is on the right side of the phone. 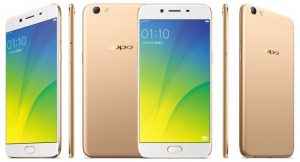 Coming to the specifications, the Oppo R9s is will feature a 5.5-inch HD (720p) display and will be powered by Qualcomm’s Snapdragon 625 SoC that comes with 4 GB RAM and 64 GB storage. The smartphone will feature a 16 mega-pixel rear camera along with a 13 mega-pixel selfie camera. The camera will be based on a Sony-made IMX398 sensor. In addition to this, the rear camera will also feature a dual-core focus which is similar to the 12-megapixel camera spotted in the Samsung Galaxy S7. The smartphone will run on Android 6.0 Marshmallow OS out of the box.

The company might also launch another variant of the R9s, which could be named as the R9s Plus. The Plus variant is likely to have a bigger display. Design wise, the R9s Plus will look like R9s, the difference can be spotted only in the size of the smartphone. The phablet will feature a 6-inch full HD (1080p) display. Under the hood it will be powered by a Snapdragon 653 processor with Adreno 515 GPU. It will be paired with 4 GB RAM. Rest of the features are likely to remain same as the R9s.

Read More: Google’s Pixel and Pixel XL Smartphone are now official and are available for pre-orders