With the launch expected sometime in early September, the iPhone 7 leaks continue in the run. As considered till now, both the 4.7 inch iPhone 7 and the 5.5 inch iPhone 7 Plus will include significant camera upgrades with the Plus model getting a brand-new dual camera system.

As per the new photo leaked by Chinese website Weibo, the separate cameras (rumored to be dual 12 mega-pixel sensors) are clearly visible. Also, the redesigned camera with ~25% larger iris for the 4.7 inch iPhone 7 can also be seen although technical specifications of the new component is unknown. Same website also leaked a video comparing the Rose Gold iPhone 7 to a Rose Gold iPhone 6s. 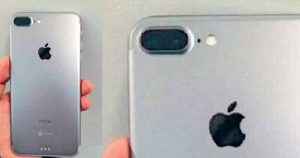 The video reveals a dummy of iPhone 7 that lacks headphone jack and features a lightening connector and two speaker grills at the back. It also includes the new camera hole at the top of the phone.

iPhone 7 is reported keep the same 12 mega-pixel count as that of current iPhone 6s, but company will increase the amount of light per pixel for better quality photographs with less noise in low light situations. The new iPhone 7 antenna lines are also visible and compared against the antenna strips on the iPhone 6s. The iPhone 7 antenna lines only trace the top and bottom edges.

Several reports have suggested that Apple will upgrade the base model of the iPhone 7 from 16 GB to 32 GB with the addition of a 256 GB top-end variant. There are also rumors of a third iPhone 7 Pro model which is said to come with Smart Connector and Apple Pencil.

Apple is expected to launch its next-generation iPhone in September alongside the release of iOS 10.

Samsung Notebook 7 Spin, the 2-in-1 convertible Laptop now available in US: Price and Specifications