The India based Tech Giants Micromax is reported to soon launch the toned down version of Micromax Canvas 5 smartphone, the Canvas 5 Lite Q463. The smartphone will come with a wooden black panel and is expected to be priced up to INR 10,000 (approx US $150). The report also claimed that the smartphone will be unveiled later this month and will be sold on Flipkart exclusive.

The specifications of the Micromax Canvas 5 Lite comprises a 5-inch HD (720p resolution) display which will be powered by 1 GHz quad-core processor that comes with 3 GB RAM and 16 GB internal storage that can be further expanded up to 32 GB via micro-SD card. The device is said to be running on Android 5.1 Lollipop OS out of the box. 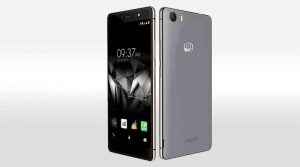 As for the camera setup, the Canvas 5 Lite is expected to feature am 8-mega-pixel rear camera with LED flash and a 5 mega-pixel front camera for taking selfies. The device is said to be backed with 2,000 mAh battery. The older Canvas 5 smartphone was launched last year in the month of November for INR 11,999. It has a 5.2-inch Full-HD display, 1.3 GHz MediaTek 6753 octa-core processor, 3 GB DDR3 RAM, Android 5.1 Lollipop operating system, 2,900 mAh non-removable battery, 16 GB internal storage and a 64 GB micro SD card slot.

It also has OTG functionality. The smartphone flaunts a 13 mega-pixel auto-focus rear camera with phase detection auto focus technology. There are two LED flash lights in the back panel too. The Micromax Canvas 5 has a 5 mega-pixel front camera for which there is an LED flash light too.

Earlier this week, Micromax launched a new Canvas Smart LED TV series in the country. Under this series, the company has launched three variants of Smart TVs that include 32-inch, 40-inch and the 50-inch display sizes. All the three variants are also listed on Flipkart at INR 19,989, INR 29,989, and INR 42,989 respectively.