The China based Tech firm Meizu is reportedly working on a new smartphone which will be named as Meizu Pro 6s. The smartphone is said to the Meizu Pro 6 that was launched by the company earlier this year and is the most powerful smartphone by the company till date. As per the reports, company’s VP already shared the back side of this phone, and by doing that he more or less confirmed that the phone will resemble the Meizu PRO 6.

The Meizu Pro 6s also spotted on the AnTuTu benchmark listing that revealed some of the key specifications of the smartphone. According to AnTuTu, the Meizu Pro 6s is said to come with Full-HD (1080p) display, though the display size is still unknown. The smartphone is said to be powered by MediaTek’s 64-bit Helio X25 deca-core processor, 4 GB RAM and 32 GB internal storage. 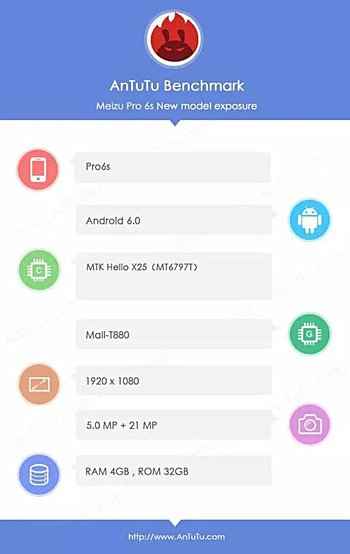 Unfortunately, there is still no information regarding the launch date and the price details of the Meizu Pro 6s. But we can expect the company to unveil the smartphone in the near future, in order to compete with its home competitors, such as Xiaomi, Huawei, Oppo and Vivo.