Home » Meizu launched YunOS-Powered U10 and U20 smartphones in China: Price and Specifications
News

Meizu launched YunOS-Powered U10 and U20 smartphones in China: Price and Specifications

Meizu has recently launched its two new smartphones under its U series, the Meizu U10 and Meizu U20. Both the smartphones are launched in the home country i.e. China.  The U20 is set to go on sale over the weekend on August 28, while the U10 will be available from September 18. Unfortunately, there is no word regarding the availability of the smartphone in other global markets. 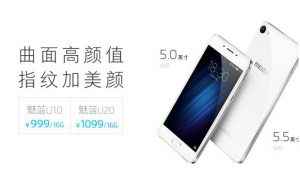 Both the smartphones boast a body encased in glass and a metallic frame. Also, the two smartphones feature a physical home button placed below the display that also double up as fingerprint scanner, which is powered by Meizu’s mTouch 2.1 technology.

Specifications of Meizu U10 and U20

Meizu U10 features a 5-inch full HD (1920 × 1080 pixels resolution) display with 2.5D curved glass. The smartphone is powered by an yet unannounced octa-core processor. Both 16 GB and 32 GB variants come with micro-SD card slot that can support up to 128 GB SD card. On the software front, the U10 runs on Flyme UI based on YunOS.

The U10 is comes with a 13 mega-pixel rear camera along with a dual-tone LED flash, and a 5 mega-pixel front snapper for taking selfies. The device is backed with a 2,760 mAh battery, and supports connectivity options like dual-SIM card slots (hybrid setup supporting two nano SIM), 4G LTE support, Wi-Fi and Bluetooth.

The Meizu U20, on the other hand, features a 5.5-inch full HD (1080p) display. It is also powered by an octa-core processor. The 16 GB and 32 GB variants both come with micro-SD card slot as same as that in U10. The smartphone is equipped with a 13 mega-pixel rear camera with dual-tone LED flash and 5 mega-pixel selfie camera. The device is backed with a 3,260 mAh battery. Connectivity options include dual-SIM, 4G LTE support, Wi-Fi, and Bluetooth. On the software front, the smartphone runs on Alibaba’s YunOS wrapped under Meizu’s Flyme UI.