Lenovo owned company Motorola has started sending media invites for an upcoming event that will be held in New Delhi on September 19. It was reported that company will launch the Moto E3 smartphone in the event, but for a change, it seems that the company will launch the upgraded version of the smartphone, the Moto E3 Power in the country. The Moto E3 Power smartphone was launched at IFA 2016 and was first unveiled in Hong Kong.

Moto E3 Power is a slightly upgraded variant of the Moto E3, with a slightly upgraded hardware under the hood. As per the social posts by Motorola India, the device is said to sport major improvements with a larger battery, better camera and a bigger screen. Motorola India also tweeted that Flipkart will be the exclusive partner for the sale of the upcoming E3 Power in India. Moreover, the e-commerce giant has also launched a special page for the unveiling of the Moto E3 Power. 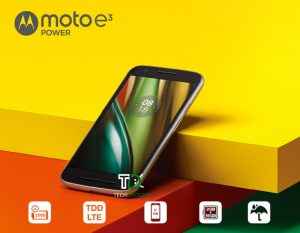 The Moto E3 Power features an 8 mega-pixel rear camera with LED flash and auto-focus and a 5 mega-pixel front camera. The device is backed with a 3,500 mAh battery, and offers connectivity options like 4G LTE, GPS, Bluetooth, and Wi-Fi. Though, we can expect slight changes in the hardware specifications.