Earlier, we reported that the first smartphone under the Google’s Project Tango, the Lenovo Phab 2 Pro is reportedly been certified by the Chinese benchmark agency, TENAA. The smartphone was announced earlier this year in June at Lenovo Tech World in Silicon Valley and is the first smartphone to come with three rear-facing camera. The point of Tango is to have an AR experience that ‘disappears’ into the background, isn’t obvious but is useful and helps you do stuff easier and better.

The Lenovo Phab 2 Pro was supposed to become available in the US online in August, but as per the recent reports, Lenovo’s US website, which earlier confirmed that the smartphone is ‘Coming this summer’, has now changed its availability to ‘fall’. This means that Phab 2 Pro could hit the markets anytime between September and mid-December.

The Lenovo Phab 2 Pro uses the motion tracking and the depth sensing cameras to learn areas, so it can recognize places (say, rooms) in which it’s been before. It’s able to map physical spaces, it can track objects, and it can project virtual effects in what is a real-world space. It can help you navigate indoor places or provide contextual information about the objects it’s seeing.

The phone will come in an all uni-metallic body that will be to available in gold or silver color options. It features a 6.4-inch Q-HD (Quad-HD) IPS touchscreen with 1440 x 2560 resolution, and no less than four cameras. There’s an 8 mega-pixel selfie camera on the front, a 16 mega-pixel main camera on the rear, as well as a depth camera and a motion tracking camera – also on the back. 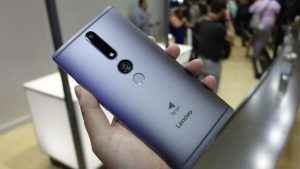