As reported earlier, Lenovo’s upcoming smartphone, Moto Z Play got certified by China’s TENAA. the country’s FCC equivalent. The device with model number XT1635-03 has all the characteristic physical features of the the Z models, the Moto Z and the Moto Z Force, including the square fingerprint sensor, camera hump and magnetic connectors on the back.

Now, as per the recent sources, the smartphone has been spotted on the GFXBench. According to the listing,  the device will be powered by a Snapdragon SoC with octa-core 2.0 GHz processor, and will features a 5.5-inch full HD (1080p) display. The device will come with 3 GB RAM and 32 GB internal storage, and also features a 16 mega-pixel rear camera unit. (via GSM Arena) 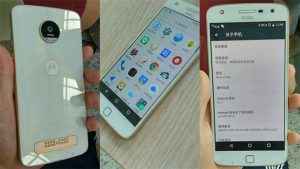 Now, these specs are pretty similar to the previous specifications that were revealed by AnTuTu Benchmark listings, which says that the device will feature a 5.5-inch display (1080p resolution) and will be powered by Qualcomm Snapdragon 625 chipset, which boasts a 2 GHz octa-core Cortex-A53 CPU. The device will come in two different variants, one with 2 GB RAM and 16 GB expandable memory and another with 3 GB RAM and 32/64 GB expandable memory.

Design wise, the Moto Z Play is much likely as similar as the Moto Z and Moto Z Play. The device has fingerprint scanner on the front as home bottom and a huge camera bump at the back of the device. But it is expected that the Moto Z Play will be made of either plastic or glass instead of aluminium. Well, its better to be in a glass rather than a plastic. Also, the MotoMods will be compatible with this phone too.