Read: Lenovo Z2 Plus smartphone is now available in India on Amazon Exclusive 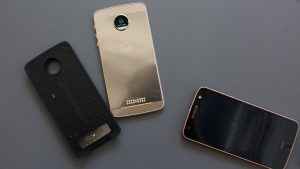 Starting with Moto Z, the smartphone comes in an all metal body that features a 5.5-inch Quad-HD (1440p) AMOLED display with Gorilla Glass protection, but not with the shatterproof protection as that of the Moto Z Force model. The device is powered by a Snapdragon 820 processor clocked at 2.2 GHz that come with 4 GB LPDDR4 RAM, Adreno 530 GPU and 64 GB internal storage that can be expanded via micro-SD card. In terms of battery life, the Moto Z Droid has a 2,600 mAh unit that should last for up to 30 hours of use, while the Turbo charging mode should deliver up to eight hours of battery life with a 15-minute rapid charge.

Other specs include a 13 mega-pixel rear camera with an f/1.8 aperture, laser auto-focus, 4K video recording and OIS, a 5 mega-pixel front shooter with f/2.2 aperture wide-angle lens and flash, and a front-mounted fingerprint scanner located under the display, just like with the Moto Z Force. Connectivity options on the Moto Z include 4G LTE, Wi-Fi 802.11ac, Bluetooth v4.1, GPS/ A-GPS, NFC, and a USB Type-C port. There is no 3.5 mm headphone jack on board, however, the company is bundling a 3.5 mm-to-USB-Type-C adapter.

The Moto Z Play comes in glass body that features a 5.5-inch full-HD (1080p) Super AMOLED display and is powered by octa-core Qualcomm Snapdragon 625 processor that comes with 3 GB RAM and 32 GB internal storage that can be expanded further via micro-SD card. The device  will be backed with a 3,510 mAh battery that can give you up to 50 hours of back-up as claimed by the company. 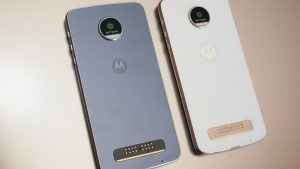 As for the camera setup, the smartphone features a 16 mega-pixel rear camera and 5 mega-pixel front facing camera. The rear camera also features hybrid auto-focus and support for up to 4K resolution video recording. Also, both the cameras have their own flash. Connectivity options include 4G LTE, Wi-Fi 802.11 b/g/n, Bluetooth v4.0, GPS/ A-GPS, NFC, a 3.5 mm headphone jack, and a USB Type-C port.

Read More: Lenovo P2 with 5,100 mAh battery and Lenovo A Plus smartphones are now official

Apple iPhone 7 and iPhone 7 Plus goes live in India: Checkout all the offers before buying one