Lenovo has launched a new smartphone under its Moto G4 series, the Moto G4 Play and this time, the smartphone is more budget friendly then the company’s previous offerings, the Moto G4 and Moto G4 Plus. The Moto G4 Play is priced at INR 8,999 and will go on sale in India from 10 PM only on Amazon. The device will be available in Black and White color variants. 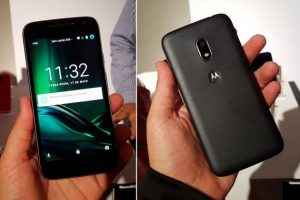 Moto G4 Play features a 5-inch HD (720p) IPS display and is powered by 1.2 GHz quad-core Qualcomm Snapdragon 410 SoC that comes with 2 GB RAM and 16 GB internal storage that can be expanded up to 128 GB via micro-SD card. The smartphone runs on Android 6.0.1 Marshmallow, and like several other Moto smartphones, comes with a water repellent nano-coating.

The Moto G4 Play features an 8 mega-pixel rear camera with f/2.2 aperture and LED flash. The front-facing camera sports a 5 mega-pixel sensor, and the company is also touting the display flash feature. The smartphone is backed with a 2,800 mAh battery and comes with a 10 W rapid charger included in the box that can provide 5 hours of battery life with 15 minutes of charging.

Also Read: Moto Z Droid and Z Force Droid now available in US, likely to come to India in October