As reported earlier, Lenovo owned firm Motorola has finally launched its Moto E3 Power smartphone in India. The smartphone is priced at INR 7,999 and will be available in the country on Flipkart exclusive starting from today midnight. It was reported that company will also launch the Moto E3 smartphone in the event, but the company focused on its battery-focused Moto E3 Power instead.

Read: Lenovo releases teaser for its upcoming Z2 Plus smartphone

Moto E3 Power is a slightly upgraded variant of the Moto E3, with a slightly upgraded hardware under the hood. As per the social posts by Motorola India, the device is said to sport major improvements with a larger battery, better camera and a bigger screen. The Moto E3 Power features a 5-inch HD (720 x 1280 pixels resolution) IPS display. The smartphone is powered by 64-bit 1 GHz MediaTek MT6735P quad-core SoC that comes with 2 GB RAM and 16 GB internal storage that can be further expanded up to 32 GB via micro-SD. The device runs on Android 6.0.1 Marshmallow, and supports dual-SIM slots (Micro). 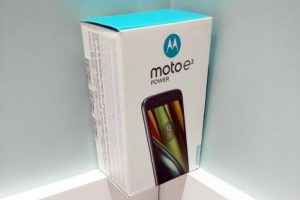 The Moto E3 Power features an 8 mega-pixel rear camera with LED flash and auto-focus and a 5 mega-pixel front camera. The device is backed with a 3,500 mAh battery, and offers connectivity options like 4G LTE, GPS, Bluetooth, and Wi-Fi. The E3 Power also bears 4G LTE connectivity, with VoLTE support, and water repellent nano-coating. It comes with a 10W charger in the box, and the company is claiming the battery can rapidly charge, delivering 5 hours of battery life in 15 minutes.

The company is also introducing launch offers that are valid till midnight on Tuesday. An exchange offer of up to INR 7,000 has been announced, as well as a no cost EMI plan of INR 1,334 per month for 8 months. Buyers will get a free 32GB microSD card bundled, and there is a INR 800 cashback offer on SBI debit and credit cards. Buyers will also be able to purchase the Moto Pulse headset for a reduced price of INR 499 alongside.