Apple’s upcoming iPhone 7 devices were rumored to have dual camera setup and also to ditch 3.5 mm headphone jack. Now, the latest leaked images give us a glimpse of the iPhone 7 Plus from all angles, confirming some key rumors about the smartphone.

As per the reports of Gadgets 360, the images were posted on Chinese website Weibo. The images reveals the the iPhone 7 Plus from the side, front and back. The back of the smartphone confirms the much rumored dual camera setup. It even reveals the Smart Connector at the back. Also, instead of a black Apple logo, a new carved logo sits at the back of the device. The front looks the same, with no evident design changes. 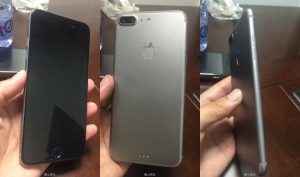 The antenna bands have been shifted to the edges. Also, Apple has also decided to ditch the mute switch from upcoming iPhone 7 Plus device. Apple includes the mute switch above the volume buttons but that seems to be missing in these images. However, no such information has been confirmed by the company.

Also Read: Expected specifications of iPhone 7 and iPhone 7 Plus