We all know the Huawei is all set to launch its most expensive and powerful smartphone, the Huawei Mate 9 on November 3. Just before the launch date, camera specifications of the same has been leaked online. As per the Gizmo China, the Huawei Mate 9 will come with 12MP + 20MP dual-rear camera setup. The report adds Mate 9 could feature an embedded fingerprint scanner as well. Just a week ago, leaks also confirmed that the Huawei Mate 9 will be powered by the company’s latest Kirin 960 chipset and ARM Mali T880 GPU.

The company in a tweet said, “Introducing the Kirin 960… A new level of innovation coming to a pocket near you. #aStepAhead.” The Mate 9 is the company’s latest flagship and Huawei is reportedly introducing a new purple colour variant of the smartphone as well. The famous tipster, Evan Blass tweeted out a picture of the smartphone in purple colour option with caption – Huawei Mate 9. The smartphone is rumoured to come in several different variants based on display and storage. 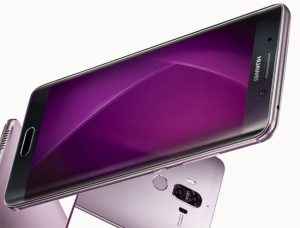 The Mate 9 is said to come in three different memory variants, and several different color options. The top model of the smartphone will come with 6 GB RAM/256 GB storage. Then there will be a 4 GB RAM/128 GB storage model. Finally, the base model will 4 GB RAM/64 GB storage variant. Huawei Mate 9 is said to feature a 5.9 or 6-inch display. Leaks suggest the Mate 9 will come in two display versions, one with a dual-edge curved display and the other with a regular flat screen.

The back of the phablet sports a dual-camera setup. One of the cameras will be a 20 mega-pixel snapper while the other weighs in at 12 mega-pixel. A fingerprint scanner is placed underneath the dual cameras on the back, and Android 7.0 is pre-installed. The smartphone is also expected to feature an 8 mega-pixel front facing camera camera. Mate 9’s camera setup is said to feature f/2.0 aperture, 4x optical zoom, laser auto-focus, hybrid auto-focus feature, contrast focus and depth focus.