The Honor 8 sits just below the Leica-branded Huawei P9. It features a glass and metal construction with a metal frame that is sandwiched between two sheets of 2.5D rounded glass screens. Inside, we have Huawei’s HiSilicon Kirin 950 chipset clocked at 2.3Ghz along with 4 GB RAM. The smartphone offers expandable storage via a microSD card slot and can accept cards of up to 128 GB in size.

The highlight of the Honor 8 is indeed its dual camera setup, which offers two 12 mega-pixel sensors on the back. One sensor reads RGB data while the second monochromatic data, both of which combine to produce images with more depth and accurate colours. The front camera is an 8 mega-pixel unit with an f/2.4 aperture.

The Honor 8 packs in a non-removable 3,000mAh battery. With a capacity that matches that of flagship smartphones. Combined with a 16nm chipset, we have some high expectations from the Honor 8. In terms of connectivity, the smartphone packs in pretty much everything under the sun. You get 4G bands (no VoLTE), Wi-Fi 802.11a/b/g/n/ac (dual band), Bluetooth v4.2, GPS, NFC and an infrared port as well. 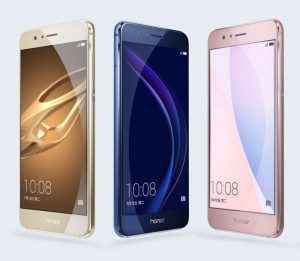 Huawei also announced its Honor 8 Smart a lower-priced version of the Honor 8. It features a 5.2-inch display of Full HD resolution. Inside, we get a 2.0GHz Kirin 650 chipset paired with 2 GB RAM and 16 GB of internal storage which is expandable. On the back there is a single 13 mega-pixel camera on the back and an 8 mega-pixel camera for selfies. It packs in 4G bands and the usual connectivity options. The Honor 8 Smart is powered by a 3,000mAh battery and runs Android 6.0 Marshmallow.

Last but definitely not the least, was the announcement of the budget Huawei Honor Holly 3. The Honor Holly 3 features a 5.2-inch HD (1280 x 720 pixels) Sun Screen display. Insider, we get a 1.2GHz octa-core chipset paired with 2 GB RAM and 16 GB of internal storage (expandable). The smartphone features a 13 mega-pixel primary camera and an 8MP unit for selfies. It is powered by a 3,100mAh battery.

Asus Zenfone 3 Laser is now available in India at INR 18,999