As per the GSM Arena, the GFX benchmark has confirmed that the Nexus Sailfish, the basic model of the two upcoming Nexus smartphones will feature a 5-inch Full HD (1080p) display. The device will be powered by a Qualcomm Snapdragon 820 SoC that will come 4 GB RAM and 32 GB internal storage. The device will run Google’s latest Android 7.0 Nougat out of the box. 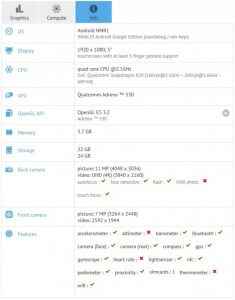 As reported earlier, the camera for the Nexus Sailfish will be the same as that of Nexus 5X which is a 12 mega-pixel rear and 8 mega-pixel front camera. Also, as per the report of BGR, the device will feature 3.5 mm audio jack on the top edge of the device. With Apple rumored to kill the aging sound connectivity tech, upcoming 2016 flagship devices are anticipated to follow suit but it is apparent that Google and its Nexus partners are extending the lifespan of the standard audio jack port.

The Nexus Sailfish will be backed with a 2,770 mAh battery. It will also feature a finger print sensor with Nexus imprint support on the back and will be mounted with a USB Type-C port.

So far, there are no details regarding the price and release dates of the Google Nexus 2016 smartphones, but if these reports turn out to be true, then the Google Nexus Sailfish will be the most powerful compact smartphone in the market.