Now, as per the recent reports, the Desire 10 Lifestyle, which is said to be a “stylish affordable smartphone” has been spotted on the AnTuTu Benchmark listing, thus revealing some of the key specifications of the smartphone. As per the listing, the smartphone will be powered by quad-core Snapdragon 400 SoC and Adreno 305 GPU. The device is also expected to feature a 5-inch (720 x 1280 pixels resolution) display. 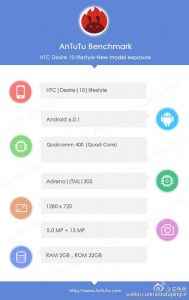 Further, the smartphone is expected to come with 2 GB RAM and 32 GB internal storage. The device will features a 13 mega-pixel rear camera and a 5 mega-pixel front camera for taking selfies. The smartphone is said to run on Android 6.0.1 Marshmallow OS. Other rumored features of the HTC Desire 10 Lifestyle include the inclusion of the Boomsound Hi-Fi Edition stereo speakers, high-end ear buds in the box, and several matte color options.

Now, as far as the phone’s design goes, if leaks are accurate, this smartphone will sport three capacitive buttons below its display. The fingerprint scanner will be placed on the back of the device, and all of its physical keys will be available on the device’s right-hand side. The smartphone is expected to be launch in September along with the HTC Desire 10 Pro.

Also Read: HTC is reported to launch the Desire 10 Lifestyle and Desire 10 Pro smartphones in September