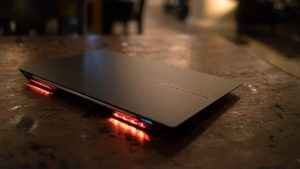 The HP’s omen line, since its launch in 2014 has created 15-inch high end gaming laptops. The same Omen line is soon to be added with two new Omen Laptops, a 15-inch variant and a 17-inch variant. Both the laptops will have all black body with red accents. The laptops will be in what HP calls as ‘Shadow Mesh’ pattern and the keyboard in ‘Dragon red’ color.

Both the Laptops will feature Nvidia GeForce 965 M graphic card which is good enough for any game at mid-to-high levels of details. The laptops will be a available in both 1080 and 4K display options along with the option of Intel’s depth-sensing RealSense camera.

Both the new laptops are going to be launched on July 10, which are priced at US $899 for 15-inch model and $979 for the 17-inch in the US. However, the International price and availability details are yet not confirmed.

This gaming Desktop is an upgraded version of HP Envy Phoenix. Earlier, HP Envy Phoenix was built with VR (Virtual reality) in mind and was designed with the collaboration with HTC.

The new version, simply known as Omen by HP Desktop, features the vertical light-up strip that runs down the front of the body. The light can set to reflect the system performance or temperature using multiple colors and patterns. 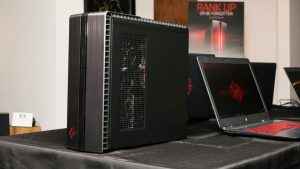 The main focus is the HTC Vive. As per the company claims, the Omen is specially tuned to provide great gaming experience with that VR headset.

The CPU is powered by an Intel Core i7-6700K chip with the just announced Nvidia 1080 series desktop GPU along with the AMD R9 Fury X option. There are plenty of ports on Omen including 6 USB ports (two 3.0 and four 2.0 USB ports), USB C and dual HDMI outputs.

HP is also offering a 32-inch desktop that pairs perfectly with this desktop. The Omen Display has two HDMI inputs, plus Display Port and an in-built USB hub that supports AMD’s FreeSync technology. The resolution of the display is 2,560 * 1,440.

The Omen Desktop and Monitor are to be launched in August, however there price and exact launch date are yet to be revealed.