Home » HP Elite x3 smartphone running on Windows 10 to be available from next month: Price and Specifications
News

HP Elite x3 smartphone running on Windows 10 to be available from next month: Price and Specifications

HP Elite x3 was first showcased in Mobile World Congress in Barcelona in February. Now, the time has come for the launch of this latest Windows phone that functions as a smartphone, tablet and PC. The smartphone is priced at $699 and will begin shipping August 29 in the US.

HP had announced Elite x3 under company’s device as a service model. As reported by BGR, HP Elite X3 will start shipping in August for a decent price of $699 (INR 47,000). Packed with killer specs and a 64 GB of memory, this cutting-edge phablet is aimed towards the corporate world. A $799 (INR 53,500) Elite X3 bundle will fetch you a Desk Dock that can connect the device with a monitor so that the X3 can be used as a desktop PC. 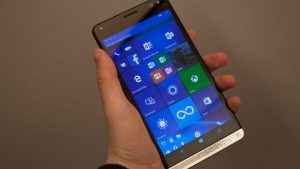 The HP Elite x3 is powered by a Qualcomm Snapdragon 820 processor. The device also features Microsoft’s Continuum that helps to transform the small-scale interface into an integrated Windows desktop environment. As per the reports of Engadget, once you connect a monitor, the Continuum feature will help to display content from your phone on the screen. Users can easily convert from a phablet screen to an external screen.

The device comes with dual-SIM slots, 802.11 ac WiFi, 4 GB LPDDR4 RAM, a micro-SD card slot and a 64 GB internal storage space. One of the most special features is a biometric authentication feature like fingerprint reader and iris detection on x3. You can quickly turn the Elite X3 into a laptop as it can be hooked up to your smartphone through a USB Type-C cable or wirelessly.