Now, the higher end smartphone, the HTC Marlin has been spotted on the same benchmark listing. According to the listing, the smartphone is said to have a 5.5-inch Q-HD display with pixel resolution of 2560 x 1440. The device is reported to be powered by Qualcomm Snapdragon 820 processor that will come with 4 GB RAM and 32 GB internal storage. The camera setup on the smartphone is said to be a 13 mega-pixel shooter on the back and an 8 mega-pixel on the front for taking selfies. 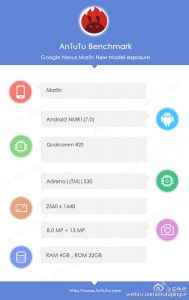 The upcoming two Nexus smartphones will be interesting for a couple of reasons. It will be the first time that HTC will be making a Nexus smartphone since after the very first Nexus smartphone. Google and Nexus are also making an interesting play in the difference between this “Marlin” and the smaller “Sailfish”. The two will be nearly identical, except in size, screen resolution, battery, and camera.

Although Android Nougat is already expected to debut in full later this month, the Nexus smartphones are rumored to land on retail only in October at the latest. It will definitely be a long wait for Nexus fans eager to see a new take on Google’s smartphones.