As we all know that Apple’s upcoming iPhone devices are set to be launch in September and as expected, the rumors for the same are continuing to leak online. The recent leaked image revealed a Space Black variant of iPhone 7 Plus and shows the new color, Smart Connector port and absence of a 3.5 mm headphone port.

New images of what is reportedly the Space Black iPhone 7 Plus have been published online and the photos provide a close-up look at the smartphone’s redesigned case that is virtually identical to that of its predecessor, the iPhone 6s Plus. The Space Black iPhone 7 Plus features a black bezel around its display and a reported 3D Touch black Home button. It is also darker than the Space Gray color Apple currently uses on the iPhone 6 and iPhone 6s series.

Read: Expected specifications of iPhone 7 and iPhone 7 Plus

The iPhone 7 and iPhone 7 Plus are expected to launch and be released in September, alongside iOS 10. The smartphones have been making headlines for months in the form of rumored features and leaked images. Most recently, images of the iPhone 7 and iPhone 7 Plus leaked and provided us with a look at the handsets in various color options, including the new Space Black variant that is widely rumored to replace Space Gray in Apple’s iPhone color palette. 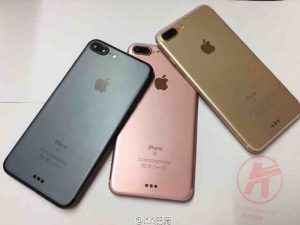 Microsoft Surface Book 2: What we can expect so far from the upcoming notebook